After visiting the farm where they do doggy daycare, and my mum and dad liking it I had my first day there on the Wednesday. My mum kept saying that it was my first day of play school, I wasn’t sure what she meant but she seemed really excited for me. My dad dropped me off at doggy daycare, and my first fur friend that I met was Ronnie the Rottweiler. When my dad came to pick me up he caught me playing with three other dogs, I was that excited from all of the fun I was having and seeing my dad that I tried to jump the gate but my dad stopped me before I accidentally hurt myself. By the end of the day, I was tired from all the playing, the lady who looked after me told my dad I had been a good boy and had made some new friends. On the Friday my mum and dad took me on a walk to a dog-friendly pub and because it was nice weather we got to sit outside. Whilst we were outside there was a five month old spaniel that I got to play with, I had so much fun! The next day my mum and dad took me on a nice long walk along the canal and the river, it’s one of my favourite walks. On the Sunday I had a busy day, we had planned to go to a dog show but first we had to make a stop on the way to meet another Sarajevo stray. Since my mum and dad adopted me, my mum has always allowed Saving Suffering Strays Sarajevo to post photos of me to share my tales. Another lady who adopted an SSS-S dog commented on one of my photos saying that I looked like her dog, Inger. And her and my mum got talking, and they queried whether their could be some relation between us as you don’t see many SSS-S dogs looking like us, plus we were of a similar age and they decided to arrange a play date for me and Inger. When we arrived me and Inger didn’t show any recollection of knowing each other, and Inger is weary of other dogs so she kept barking at me for the first 10 minutes, during this time I decided to give her space until she was ready to be near me. Inger soon warmed to me and we were walking side by side. We walked for about an hour on some Meadows, it was lovely! I even found some water to dip my toes. We soon had to say goodbye to get me to the dog show in time. My mum and dad still think there may be some relation between us, just not from the same litter. Especially because our behaviour and learning abilities are quite different. 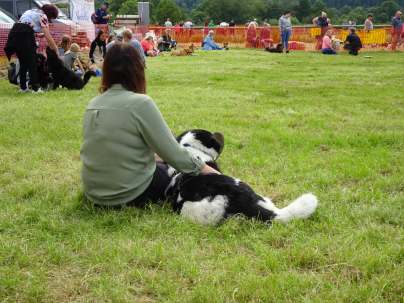 We made our way to Dogs Unleashed in Bakewell and when we arrived there were so many dogs. It was amazing! They had lots of stalls and games for all us dogs. As soon as we got there my mum directed us to where the dog shows were taking place because she wanted to enter me into some of the categories. I first got entered into the Most Handsome class, there were a LOT of dogs – probably about 40 dogs? They had some judges going round talking to all the humans and then they chose 12 dogs to make it to the finals, I was one of the lucky finalists. Unfortunately I didn’t make the top 6 but it’s OK, every dog is handsome and I know I’m handsome, my mum tells me that all the time. AND! I got a rosette for making it to the finals.

We had some time to spare before the next competition that I was entered into so we continued to have another look around the dog show and then decided to head into Bakewell. Whilst we were there my mum and dad bought some chips from the fish and chip shop, they also bought me a sausage which was TASTY! Before long we headed back into the dog show, and my mum bought me some tasty treats from a stall called Marge and Mabels. She bought me some venison and kale treats, as well as kangaroo and carrot treats. I thought she had finished choosing but no! She also bought me some Mackerel straws, om nom nom. Next, it was time for me to show off my skills in Best Biscuit Catcher, for this we had to make it through rounds of catching biscuits each time it getting more difficult. I caught every biscuit from all four rounds and ended up coming 2nd place, my mum was so proud of me, especially because when they first got me I couldn’t catch anything, I just wasn’t very coordinated. But look at me now! My prize for coming 2nd was a rosette and a goody bag which included a toy and some more treats! Then the last competition I was entered into was for Best Rescue, which is a tough one because all of us rescues are worthy winners. Again the judges went round talking to all the humans to learn about our (the dogs) histories and as my mum was telling my story she started crying, she didn’t mean to cry, she even apologised to the judge. My mum had told her how I came into her life at a difficult time, and that we saved each other. Whilst the judges were making there way round my mum was finding it difficult to stop crying, she kept saying how much she loved me and was lucky to have me – we had a little cuddle and she eventually stopped. We were again narrowed down further which was really difficult for the judges, and then the final 6 were decided. I again came 2nd place which meant another rosette, more toys and more treats! I truly was a spoilt dog. And I just want to say that all the dogs that day are worthy winners.

Anyway, after a long day we decided to head home but first another trip into the river (I kept dipping my toes throughout the day) before getting in the car. Where they took me there was another dog having a swim, and I don’t tend to swim, I just like to lay down in the water but because of this other dog swimming (and it only had three legs), I thought I’d give it a go. I didn’t swim for long but I still enjoyed it.

When I got home I was tired but I just about had the energy to pose for a photo with my rosettes for my mum because she’s so proud of me. I had a super busy, exciting week but it did leave me really tired. Until next time humans.
Paws Out
Bandit

Hello, my name is Bandit, I am approximately 4 years old and I too was once a Sarajevo stray who was saved from the local kill pound. And last year my human parents (Ruth and Dan) adopted me and took me to my furever home on March 28th 2018.

Since then they have given me a bed, I also have my own bedroom! I get regular, frequent meals every day, as well as treats when I’ve been a good boy. I also get given toys even though I like to chew them up as soon as I get my paws on it. They take me on lots of walks, and often they take me out to new places so I can explore the world around me!

A couple of months back I even had the pleasure to watch my mum and dad get married although I did get upset when they were both crying but when they stopped, I stopped. And I was told that I was the ‘Best Dog’ and that I looked handsome with my corsage.

Since being in my furever home I have learnt to love being in the water, even in the winter when it’s cold out and I like to go in muddy puddles which my mum and dad don’t mind, probably because they give me a bath afterwards. And my absolute favourite thing to do which I had never experienced before, was to receive and give cuddles! They also smother me in kisses, and I in return like to try and lick their ears.

So that is my story so far, it’s still early days and I just know I have so much left to see and do! Once again my name is Bandit and you will recognize me because I wear a bandana.